The Vatican Library is institutionally a library that, for more than 500 years, has fulfilled its fundamental purpose, gathering, preserving and restoring the patrimony of books stored within it in order to make it available to all. This task has been demanding because the consultation of ancient books naturally causes their "wear and tear", and, as time goes on, the danger of their deterioration has become greater. However, the Vaticana has never forgotten that the gratuitous consultation of his immense wealth offered to scholars from around the world is a mandate from which it could never be exempted from.

Precisely in compliance with this role and wanting to preserve its manuscripts for future generations, a project of "long-term digital preservation" has begun. On the one hand, the project would guarantee the most longevity of the technological product obtained and, on the other hand, it would allow for the divulgation of the Vatican Library’s manuscripts to a wide representation of users worldwide.

Making the realization of the project even more exciting, one must remember that a great number of manuscripts have not been thoroughly studied and that, although the efforts are centuries long, only 20% of the collections have been satisfactory cataloged in a scholarly manner. The project, launched in 2010, was preceded by a long period of preliminary study, in which guidelines were laid down to be followed during the acquisition phase. Afterward, a TEST BED was implemented, that would allow testing and the proper design of all infrastructure and the hardware and software resources needed.
The first analysis and design were carried out thanks to the collaboration of the following (whose names are reported with the affiliations valid at the time of the beginning of the project, 2010)

The analysis of the initial period have highlighted the uniqueness of the endeavor and therefore the inability to benefit from experiences resulting from similar projects of: "Long Term Digital Preservation"

In fact, until now, in the world there are no experiences with archiving of this entity and who have at least 10 PETA BYTE data stored with LTDP criteria.

The project made use of the fruitful collaboration of the IAU organization in the world by the FITS standard. The members of the IAU has provided us with not only extensive expertise gained on the FITS and its Keywords, but also an extreme kindness and helpfulness of the countless questions we raised and the various solutions recommended to us. 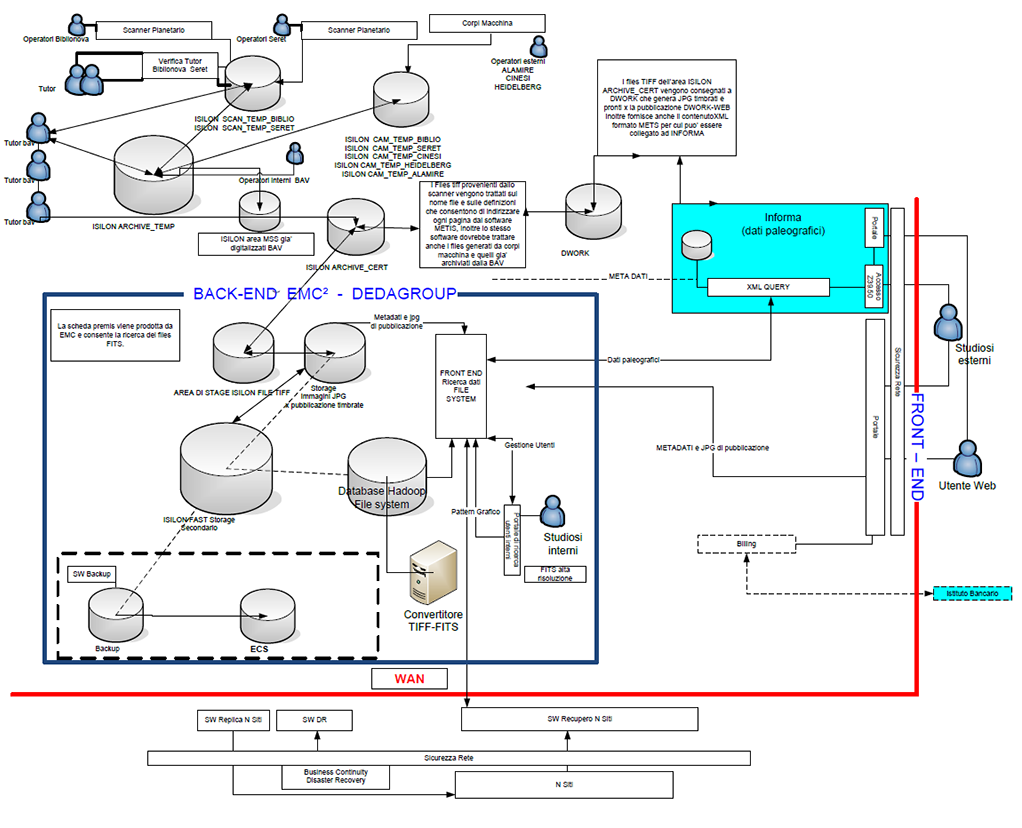 The acquisition will create an original in digital format because of the Vatican Library philosophy is:
Tap once the manuscript to store and disseminate free of this heritage to future generations.

No wear from the original copies manipulation

This site uses cookies, some of which are essential for its correct functioning.For further details see Cookie Policy.
By closing this banner, scrolling this page, clicking on a link or continuing navigation in any other way, you consent to the use of all cookies.

Please wait a moment,
we are processing your request ...